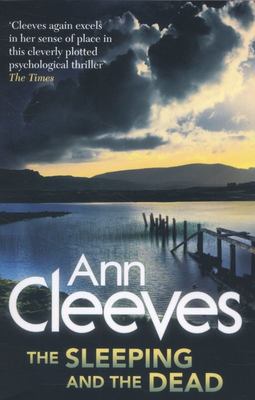 The Sleeping and the Dead

Detective Peter Porteous is called to Cranwell Lake where the body of a teenager has been discovered. After trawling through the missing persons files, he deduces that the corpse is Michael Grey, an enigmatic and secretive young man who was reported missing by his foster parents in 1972. For country prison officer Hannah Morton it is the shock of her life. Michael had been her boyfriend, and she had been with him the night he disappeared. The news report that a body has been found brings back dreaded and long buried memories from her past ...'Cleeves again excels in her sense of place in this cleverly plotted psychological thriller' The Times 'A suspenseful crime story that puts Ms Cleeves in the Rendell class' Peterborough Evening Telegraph

Ann Cleeves worked as a probation officer, bird observatory cook and auxiliary coastguard before she started writing. She is a member of 'Murder Squad', working with other northern writers to promote crime fiction. In 2006 Ann was awarded the Duncan Lawrie Dagger for Best Crime Novel, for Raven Black. Ann lives in North Tyneside. The Crow Trap, Telling Tales, Hidden Depths and Silent Voices from Ann's Vera Stanhope series are all major ITV productions and Red Bones, the third in Ann's Shetland series, is a major BBC1 two-part drama.