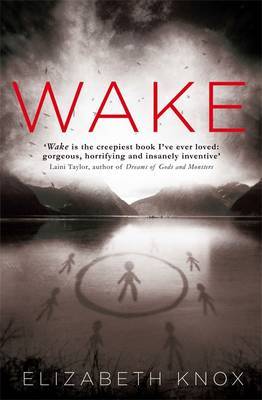 When police officer Theresa Grey is called to the New Zealand town of Kahukura on Tasman Bay, she drives straight into a horror story. The locals have been overwhelmed by a sudden collective madness, causing them to kill themselves and each other in truly gruesome ways. First, Theresa tries to help; then, she is forced to run for her life. An hour later, she emerges to a scene of carnage. There are thirteen other survivors. Slowly, they find one another and face their new reality: trapped in the town by some kind of invisible force-field, cut off from the world outside. What begins as a story of horror becomes a story of survival. Together, they must bury the dead, become a community, face their own fears and weaknesses. Ultimately, they must fight for their lives - because whatever caused the insanity is still at large. And it hasn't finished. Rich with atmosphere, alive to character and emotion, Wake is a riveting tour-de-force. A book about extreme events, ordinary people, heroic compassion - and invisible monsters.

First comes catastrophe. Then comes survival. Atmospheric, gripping, Wake is a chilling tale of horror and survival, by New Zealand's preeminent authors: a uniquely compelling story about how people preserve their sanity, their humanity - themselves, and each other - when threatened by an invisible monster.

Wake lingers as more than an intricate piece of blood-splattered clockwork; it is the work of an author who knows horror is more than gross anatomy. It's also the ghosts and ruins of our own hearts. NZ Listener Elizabeth Knox has the most original and lateral literary mind in New Zealand ... I steamed through the book; by the end my hair stood of end. I shouted , "Holy shit!" several times. Metro Irresistible. NZ Herald Elizabeth Knox's gripping adult novels are literary but dynamic, sensuous and inventive. She has a striking ability to evoke a potent sense of time and place far removed from her writing base in New Zealand. Independent Knox's writing is sensory and lush and her imaginative intensity rivals the best of Diana Wynne Jones's stories. The Australian

Elizabeth Knox is one of New Zealand's leading writers. She is the author of ten novels, including The Vintner's Luck (longlisted for the Orange Prize 1999). Elizabeth was made an Arts Foundation Laureate in 2000 and an Officer of the New Zealand Order of Merit in 2002. She lives in Wellington with her husband and son.