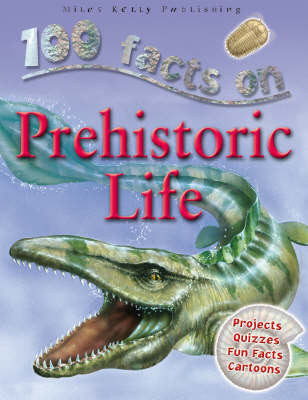 100 Facts Prehistoric Life covers key topics about creatures that lived millions of years ago in interesting numbered facts. Information is surrounded by amazing illustrations and photographs that put unbelievable facts into context for children. Our amazing dinosaur books for children are perfect for learning more after visiting museums or watching prehistoric-themed films.
Essential topics covered in 100 Facts Prehistoric Life:
- The dawn of time and the evolution of Earth's landscape
- Extinction phases and life beginnings such as the first appearance of humans
- Prehistoric giants and what their fossils can tell scientists
Examples of 'I don't believe it' fascinating facts:
- The tusks of Anancus were over 4 metres long - almost as long as the animal itself.
- Mastodonsaurus may have had tusks sticking out of its nose - two front teeth poking through holes at the end of its snout!
- The first fossils of the giant ape Gigantopithecus to be studied by scientists came from a second-hand shop in Hong Kong, over 70 years ago.
Activities to make learning accessible and interactive include:
- Make edible reptiles using dried milk, smooth peanut butter, honey, currants and food colouring
- Quiz question: Did the first crocodiles like water?
- Copy a Hyracotherium from this book onto some card, cut it out and hang it on a line of string. Flick it along while a friend does the same with another and see who gets to the end first!