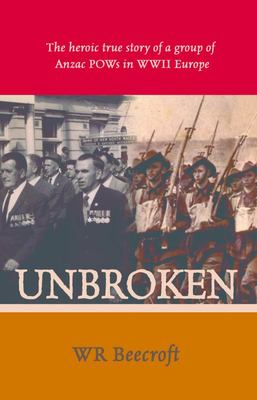 It is 1941, and the German High Command has sent General Irwin Rommel and the Afrika Korps to bolster the faltering Italian ground forces in North Africa and take over the beleaguered fortress of Tobruk. The defenders hang on grimly, but prisoners are taken on both sides in the ebb and flow of battle. In Greece and Crete, the reverse occurs; commonwealth forces are overwhelmed by the might of the Wermacht, and many fall into the hands of the Germans. Many of the Australian and New Zealand prisoners eventually find themselves incarcerated in Campo 57, Gruppignano in north east Italy, under the iron fist of the notorious Colonel Calcaterra of the Caribinieri. Unbroken is the true story of Australian POWs, their capture, their attempted escapes and their ultimate liberation.