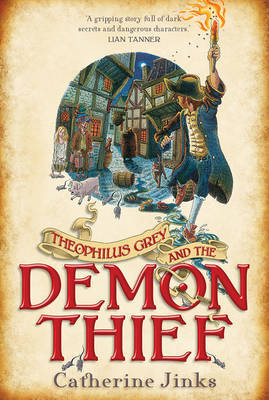 Book one of a two-part intriguing mystery series set in the perilous back alleys of Georgian London. From the multi-award-winning author of A Very Unusual Pursuit.

Twelve - year - old Theophilus Grey - Philo to his friends - heads a team of linkboys who guide Londoners home through the dank eighteenth - century alleys by the light of their torches. In the process, the boys pick up useful information for their master, Garnet Hooke, who runs a spy network from his sickbed. When thieves and rogues start dropping without a scratch, rumours spread of a dangerous faery demon on the loose, and Philo begins to fear the worst. Then a sudden wave of crime sweeps the neighbourhood, and he can't help but wonder if the two are connected. With help from his new friend, Mr Paxton, Philo finds himself battling a threat far more sinister than any he's faced before. He will need to use all his cunning to uncover the truth behind the demon thief in time to save his friends. This gripping tale of spies, spells and secrets plunges the reader into a dark and perilous world where superstition clashes with the Age of Enlightenment.

Catherine Jinks was born in Brisbane in 1963 and grew up in Sydney and Papua New Guinea. She studied medieval history at university and her love of reading led her to become a writer. Her books for children, teenagers and adults have been published to wide acclaim all over the world, and have won numerous awards. Catherine's most recent titles include the multi-award- winning A Very Unusual Pursuit; Book One in the City of Orphans trilogy, the bestselling Evil Genius books, and her paranormal spoofs, The Reformed Vampire Support Group and The Abused Werewolf Rescue Group...Catherine lives in the Blue Mountains in NSW with her husband, journalist Peter Dockrill, and their daughter Hannah...