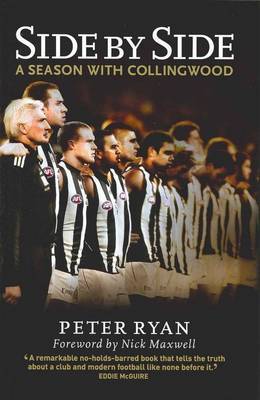 Side By Side Collingwood 2009

AFL Football is the most competitive sport in Australia and the Collingwood Football Club is the most famous sporting club in that competition.Peter Ryan has spent the 2009 season within the inner sanctum of the Collingwood and has witnessed firsthand the reality behind the headlines. This book describes that reality: the pressure, the emotion and the personalities that make AFL football our addictive winter passion. It is a wild ride as Collingwood chases its first premiership since 1990, a test of character, brains and strength. It is both a human story and a sporting story of the inner workings of Australia's most famous sporting club.We haven't a title or a final cover image confirmed because we're waiting for the final chapter. In this year-long story, can Collingwood win the 2009 AFL premiership?