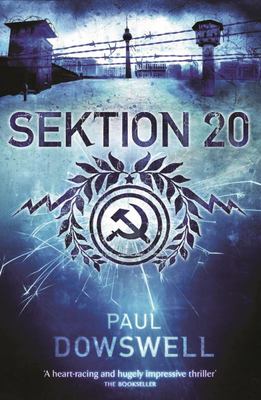 Alex lives in East Berlin. The cold war is raging and he and his family are forbidden to leave. But the longer he stays the more danger he is in. Alex is no longer pretending to be a model East German, and the Stasi has noticed. They are watching him. Alex is told that further education will be blocked to him. His summer job is mysteriously cancelled, and friends begin avoiding him. His parents start to realise that leaving the East may be the only option left to them, but getting across the Wall is practically impossible. And even if Alex and his family make it to the other side, will they be able to escape the reach of the Stasi? This is a tense, page-turning thriller that builds towards a terrifying showdown as powerful forces from the East and West converge. One false move will change everything for Alex and his family, for ever.

An incredibly powerful children's thriller by the author of Auslander, which was shortlisted for the Booktrust Teenage Prize and Red House Children's Book Award, longlisted for the Carnegie, and had outstanding reviews Set in the Cold War era, which popularised spies in both film and fiction, this is a meticulously researched and gripping story of espionage and subterfuge From a hugely experienced award-winning non-fiction author

Praise for Auslander: 'A breakthrough into the top league for Dowswell, a hugely impressive thriller set during the Second World War ... There will be many adults sneakily borrowing this from their children' The Bookseller 'Auslander is a superlative, at times almost agonisingly compelling, piece of historical fiction ... The climactic escape to freedom is pure muck-sweat tension' Financial Times 'Doswell is one of the best new writers of historical fiction for children ... [Auslander] steps outside the victim culture of novels such as those by Morris Gleitzman and comes close to classics such as The Silver Sword. Admirers of The Boy in the Striped Pyjamas should look at this novel as a model of imaginative sympathy' The Times Praise for Sektion 20: 'A great thriller with a poignant historical background ... A terrific book' The Bookseller

A former senior editor with Usborne Publishing, Paul Dowswell is now a full-time author. He has written over 60 books, including Auslander, nominated for the Carnegie Medal, the Red House Children's Book Award and the Booktrust Teenage Prize. Paul lives in Wolverhampton with his family.